Hamsters are known for being clean animals, but they still pee and poop in the exercise wheel in their cage.

You must be wondering why they do it, what is the reason?

Hamsters often pee in the wheel to mark their territory and let others know that the wheel is theirs. They may pee in the wheel for other reasons such as urinary tract infections, and fear, and sometimes they do it for no particular reason.

In fact, hamsters do not know that they are not supposed to pee on the exercise wheel.

In today’s article, we will find out why hamsters pee on the wheel and how to stop them from doing it.

Why do hamsters pee on their wheels?

As we said at the beginning, there can be many reasons why hamsters pee on the exercise wheel, from fear to a simple habit, so let’s read in detail about all the reasons for this behavior of hamsters.

Since hamsters are very low to the ground, they can easily carry bacteria that then cause UTIs.

When hamsters have a urinary tract infection they urinate a lot and that is one of the reasons why they pee in the exercise wheel.

Fear can be the reason why hamsters pee and poop on the exercise wheel.

If at the moment the hamsters are on the wheel, and at any time they have some danger, they will urinate on the wheel.

Hamsters are very timid and any sound can easily scare them and they will pee and poop on the wheel.

That is why it is necessary for the hamsters to have a comfortable and peaceful environment so that this situation does not happen, that is, they will urinate less on the wheel.

When hamsters pee and poop, they usually do it in a specific place, such as in the corner of the cage or in the sand bath.

But sometimes they choose the exercise wheel as their place to pee and poop.

When the hamsters get used to peeing in the exercise wheel, then we will have to do something to stop this habit.

The best way is to clean the wheel more often to wean the hamster from using the wheel to pee.

Especially any type of bedding and other similar things that are currently on the wheel should be removed during cleaning.

When hamsters exercise on their wheel they are so engrossed in running, they won’t wait to go to the bathroom.

They will pee on the wheel because they don’t want to stop running.

In fact, hamsters pee wherever they go no matter where they are at that moment. When hamsters run on the wheel, they perceive it as running outside or inside the cage, because they run several miles every night.

Hamsters don’t mind peeing on the wheel and the dirt they leave behind.

When hamsters pee on the wheel they don’t want us to clean it because that way they will lose their smell.

Cleaning the wheel is necessary, but we don’t need to clean it too much, just enough to remove the dirt from peeing.

That way we won’t cause the hamsters to pee all the time to get the smell they want to always be present.

Do hamsters pee to mark their territory?

Hamsters like to mark their territory, and in this case, it’s their exercise wheel.

They urinate on the wheel to let others know that the wheel is theirs and no one will take it from them, even though in reality they are alone in the cage.

Marking territory or the exercise wheel is the natural instinct that they have acquired when living in the wild and this cannot be changed.

How to stop the hamster from peeing in the wheel?

It’s a little more difficult to teach your hamster not to pee in the wheel because that’s his natural way of urinating.

However, you can try several methods to wean the hamster from peeing in the wheel.

Here are some tips on how to do that.

If you clean their wheel frequently, you can wean your hamster off from peeing and pooping in it.

Because hamsters are used to the smell of the wheel along with their urine, and when it is clean they can find another place in the cage to pee.

However, this does not mean that you will succeed in changing his habit, but you can try and see what happens, and if you fail, it is still worth a try. Another interesting way to wean your hamster from peeing in the wheel can be by using a litter box.

Put soiled bedding in the box so that the hamster will understand that it should go there to pee and not in the exercise wheel.

Putting sand in the litter box is also a good option, it will help keep it from tipping over.

Then you can take a piece of tissue, wipe the pee in the wheel with it, and put it in the litter box. This way the smell of the pee will attract the hamster to go to its new toilet.

This can be successful, but it takes time for the hamster to understand that it needs to pee or poop in the litter box.

This process of taking a piece of tissue from the wheel to the litter box can take weeks.

Read more: How To Clean Hamster Wheels? (Plastic and Wooden)

If the hamster does not want to get used to peeing and pooping in its litter box or toilet, then remove the wheel for a few days to force it to use the box.

But you must return the exercise wheel after a few days because it is of great importance for the hamsters and their health and fitness.

Or if the cage is large put two toilets at two ends in the cage to see if this will work as well.

Hamsters urinate in the exercise wheel mostly to mark their territory, and sometimes when they have fear, but it can be also for no reason.

It is difficult to wean hamsters from peeing in the wheel, so this is a completely natural way, and they do not feel and do not know if it is okay or not to pee in the wheel.

You can try to wean the hamster from this habit, but it will depend on the hamster himself, and how he will accept a change in his place of peeing, that is, instead of peeing in the wheel, to urinate in other places. 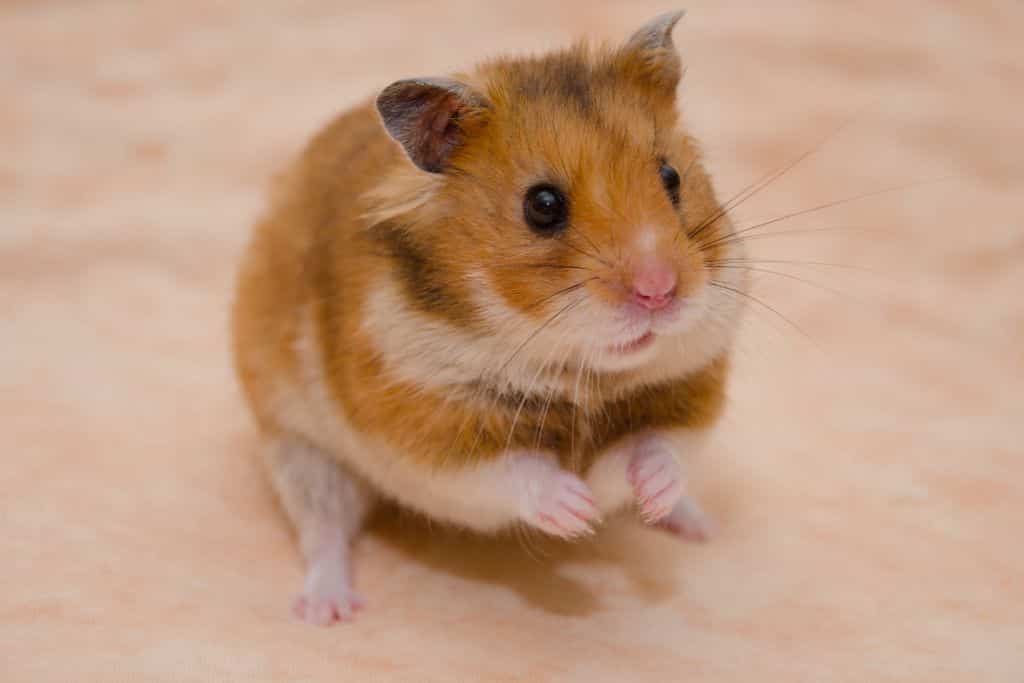